The history of the Vang

The Vang Terraces facility was built in 1987 – this date may be spotted on a metal weathercock placed on the tower of the building.

The facility would be the first inn for tourists in Karpacz which, at the time, began to be perceived as a resort town. It would soon turn out that the number of tourists coming to the town was to rise steadily and only then other accommodation facilities have started being established.

The Vang Terraces have immediately attracted a large number of guests who – as delighted with the place – would return there on a regular basis. During the interwar period, Kurt Weill – an outstanding German composer – would presumably be the most renowned guest of “Hotel und Terrassen Wang”. He stayed there for a couple of weeks in 1931 to rally after having concluded a court case against the Nero-Tobis production company which concerned the unlawful alterations they made to the film adaptation of “The Threepenny Opera”. Another interesting fact is that in the year of 1945, the operation of the Vang Terraces hotel was handed over to the mother of a famous Polish actress: Barbara Tyszkiewicz – namely to Barbara Tyszkiewiczowa, née Rechowicz.

After the war, the management of the facility was taken over by Fundusz Wczasów Pracowniczych (the Worker’s Holiday Fund) and it would initially be known as Dom Wczasowy “Wang” (“the Vang” Holiday House), later to be renamed to Dom Wypoczynkowy “Leśny Zamek 2″ (“the Forest Castle 2″ Rest House).

The facility would provide family-oriented holiday to those employed in factories and offices. How vivid a stay in the accommodation facility must have been like may be learnt from the guest books that have been retained.

In 2004, the facility was taken over by a new owner who subjected it to a general overhaul, having restored it to its former glory.

The history of the Vang Terraces has always been associated with the nearby-located Vang temple. Grand wedding receptions would be held there to accommodate those couples who had had their wedding celebrations arranged in the church known as “the place of blissful marriages”. 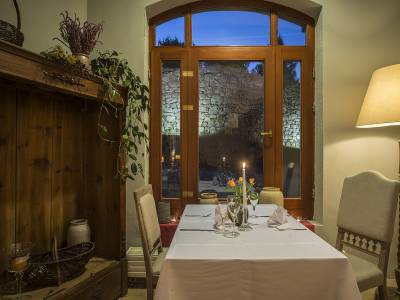